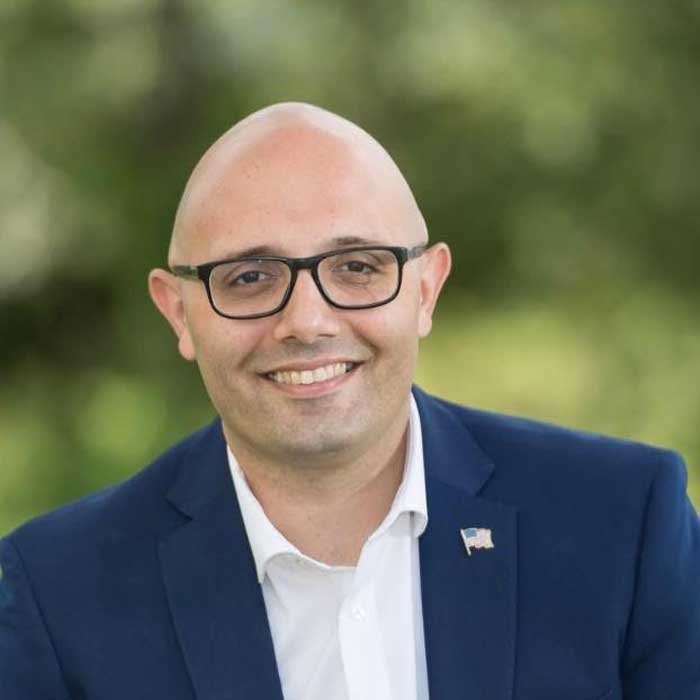 Anthony Piccirillo, (R)
incumbent
Suffolk County Legis. Anthony A. Piccirillo is a lifelong resident of the 8th Legislative District. Born and raised in Holbrook and Holtsville, Piccirillo graduated from Sachem North High School in 2001 and currently resides in Holtsville with his mother, Paula, brother, Alex, and dog, Dani.
Piccirillo was first elected to office on Nov. 5, 2019 and took his oath of office on Jan. 2, 2020. The 8th Legislative District covers Bayport, Blue Point, Bohemia, Holbrook, Holtsville, Lake Ronkonkoma, Medford, Oakdale, Sayville and West Sayville.  Piccirillo is currently serving on the Environment, Parks and Agriculture Committee as well as the Veterans and Consumer Affairs Committee.  His top legislative priorities are to find a solution to solve the debt crisis in Suffolk County, protect our drinking water, and put a halt to the overdevelopment of our suburbs while promoting smart growth.
Prior to being elected to office, Piccirillo went to Suffolk County Community College and Dowling College, where he studied history. He spent more than 20 years in the private sector working various service industry jobs. More recently he was a legislative aide for Suffolk County Legis. Steve Flotteron. He helped work on the Reduce County Spending Task Force and helped to draft a bill to allow the Legislature to record and live-stream video of committee meetings. He also helped to write legislation for the county to recognize Italian History Appreciation Month and Irish History Appreciation Month.

TOP THREE ACCOMPLISHMENTS DURING HIS TERM AS LEGISLATOR:

Being readily available to address and take action on constituents’ concerns.
“I would say we’ve successfully handled over 1,000 constituent concerns since I came into office,” said Piccirillo.

Fighting for the middle-class taxpayer
“The county was so mismanaged financially when I came in,” said Piccirillo, who said a “deep dive” into budget cuts was “sorely needed.”
To recover from the junk bond rating, the county will now be paying a significant portion of the debt accrued from the $580 million borrowed against the county employees’ pension fund with the $600 million in pandemic relief money from the Trump and Biden administrations.
Piccirillo said he voted down every bill that included raising taxes or additional spending.
The county has also been able to save from cuts to salaries, benefits, and pensions of county employees where new hires will start at lower pay scales.
“We found a good balance where county employees can still have a good salary and benefits,” said Piccirillo.
Another initiative that Piccirillo is behind is to “do more in-house” with public works projects, as he estimates that using DPW architects and employees will turn into significant savings rather than giving contracts to third parties.

IDLE HOUR MANSION
“It is a gem of the community and I hope the saga comes to an end soon,” said Piccirillo, who immediately joined the Oakdale community neighborhood watch group when contacted about the blighted property.
Piccirillo said as soon as he knew, he looked into the property’s taxes and that the owner, Mercury International, was at risk of having the property seized by the town for back taxes.
Piccirillo said that the legal process to provide security at the property must be carried out to avoid the town being sued for entering private property unlawfully.

ISLAND HILLS DEVELOPMENT
“It is greedy, reckless, and an unmitigated disaster to build a six-floor, 1,357-apartment complex [on the Island Hills property],” said Piccirillo.
While Piccirillo lamented that community desire for a park or a golf course was not foreseeable, he was emphatic that the developer, Rechler, stick to the current zoning to build 81 single-family homes.

SEWERING
“I have worked in the legislature to shepherd along the Oakdale sewer project as the wastewater is percolating onto people’s front lawns,” said Piccirillo.
Following pandemic concerns, the initial price tag for Phase 1A, which would include 331 homes, went from $26 million to $41 million, and will be up for public referendum.

‘Sprinkling’ joy with her desserts

They say a picture speaks a thousand words, and a live demonstration of how an emergency medical service volunteer, or professional, would stop the bleeding on a shooting victim, was a clarion call …

Floyd girls soccer defeats Bellport
The William Floyd High School varsity girls soccer team picked up their third win of the season with a strong 5-2 victory over Bellport on Friday, Sept. 16, in a home game at the Lincoln Avenue …
Floyd football dominates
A dominating second-half surge sent William Floyd passed Walt Whitman by a score of 37-13! The stout Colonial defense shutout Walt Whitman in the second half, while the rushing attack on offense …
‘My vision is to help as many people as I can’
Anthony Cerabino is passionate about helping people stay well and feel their best. Born and raised in Bay Shore, Cerabino now owns Healthcare Wellness Center on West Main Street in the town. The …